Draw the Line: 100+ Things You Can Do to Change the World!

Over a hundred comic artists from across the globe illustrate the many actions we can take to help improve our world. Cowritten with creator and artist Myfanwy Tristram, this rabble-rousing, humorous, visually stunning guide is the perfect antidote to frustration and despair over the current state of society and politics. Be inspired, get involved, and “draw the line.”

New from Lerner Books in Spring 2022:

Our brave new world is here. Science fiction’s “what if?” has become the scientist’s “why not?” Today, genetic technologies can remake animals in almost any way we want, and genetic engineering is being used to help solve a range of urgent problems, including climate change, species extinctions, conservation, disease, human health, and in the food industry. But as science fiction likes to warn us, altering animals isn’t without dangers, and it raises profound ethical concerns. Glowing Bunnies!? explores how genetic engineering is currently reshaping animals and our world and asks that all-important question: Given what we can do, what should we do?

Last of the Giants: The Rise and Fall of Earth’s Most Dominant Species 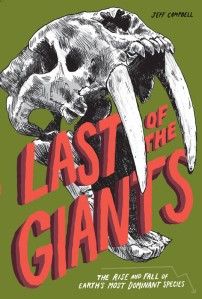 Written for young adults, Last of the Giants tells the stories of thirteen giant species who once dominated our world but who have suffered loss and extinction in modern times. What happened when humans first met these beasts, and what role have we played in their demise? Most of all, how can we change the fate of giant species today? A 2016 Junior Library Guild selection, Last of the Giants explores our role in the world’s current extinction crisis, why it matters, and how we can learn to live with the awe-inspiring creatures who still rule Earth’s remaining wilderness. [Zest Books, March 2016]

Teachers: Download the Last of the Giants Study Guide!

Emphasizing the connection between extinction and conservation throughout, . . . these timely, important, and fascinating stories will encourage readers to save all life, no matter its size. —Booklist (starred review)

The text’s explorations of these annihilated species are complex and perceptive. . . . Required reading for the budding naturalist and a good pairing for a STEM or history curriculum, too. —School Library Journal (starred review)

Daisy to the Rescue: True Stories of Daring Dogs, Paramedic Parrots, and Other Animal Heroes

With their love and companionship, animals help make human lives better every day. But sometimes, to our utter amazement, animals literally save our lives. Daisy to the Rescue celebrates over fifty of these heroic animals with stunning portraits and detailed accounts. Throughout, the book asks important questions about why these animals act the way they do—often putting themselves in harm’s way in the process.

By examining the incredible life-saving exploits of dogs, dolphins, pigs, parrots, horses, gorillas, seals, and more, Daisy to the Rescue makes a compelling case for the presence of empathy, compassion, morality, and even altruism in other animals. [Zest Books, October 2014]

Do animal heroes deserve an award? You bet!

Daisy to the Rescue has won the 2015 Independent Publisher Book Award National Gold Medal in the Animals/Pets category, and Foreword Reviews’ 2014 INDIEFAB Book of  the Year Bronze Award in Young Adult Nonfiction.

When starting these fifty tender stories, prepare to get teary eyed. Anyone who has ever bonded with an animal will love this book. —Voice of Youth Advocates

Individual stories of animal derring-do, illustrated with pencil portraits, make for quick, compelling reads that prompt the reader to wonder what really goes on in an animal’s head and heart. Give this to anyone from middle school to adult who shares that curiosity.            —Booklist

The author’s voice is strongly felt throughout, . . . the text flows well, and the compact content is intense.  . . . The documentation shines. —School Library Journal

From kangaroo to lion, from dolphin to dog, and from horse to hamster (there really isn’t a hamster, but there is a rabbit), the stories will touch readers’ hearts and stir their imagination. . . . This book would also be a great choice for nonfiction reading in the school setting. —Examiner.com